The Voting Rights Act at 50 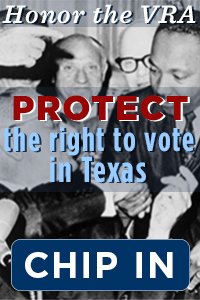 Fifty years ago today, grassroots activists won a monumental victory when the Voting Rights Act of 1965 (VRA) was signed into law. But now, Republicans are doing everything in their considerable power to roll back that progress.

Texas is now the epicenter of this voting rights struggle. Just yesterday, the conservative Fifth Circuit Court of Appeals ruled 3-0 that the GOP’s strict voter ID law violates the VRA because it disparately impacts black and Latino voters. As if that wasn’t enough, repeal of the Voting Rights Act is actually part of the Texas GOP’s official platform (no joke).

That’s why Battleground Texas will never stop defending the right to vote. We’re negotiating with the Texas Secretary of State to fix rampant voter registration problems at the Department of Public Safety. We operate the Texas Voter Hotline to answer voter questions and address issues. And our volunteers have the courage to jump through hoops and register their fellow Texans to vote in the face of stupefying obstacles.

As you celebrate the Voting Rights Act today, can you pitch in $10 or more to support voter protection in Texas? It only takes a second.

The fight to protect our civil rights, including the fundamental right to vote, will continue as long as there are Republicans willing to write discriminatory laws and block access to the polls.

I’ve gotta get back to work. Thanks for your support.