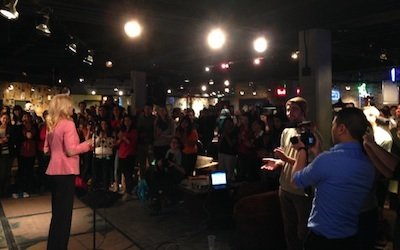 As a student at Rice University and a long-time employee at Willy’s Pub, I’ve spent my fair share of Wednesday afternoons comfortably perched on a rickety bar stool, quietly observing the comings and goings of our sleepy student-run bar. This Wednesday afternoon, however, was unlike any that I’ve ever seen — because State Senator Wendy Davis stopped by to say hello.

When I signed on as a Battleground Texas Fellow five months ago, I never dreamed I would have the opportunity to help plan an on-campus event for Senator Davis, but when Battleground Texas mentioned she would be in town, I knew we had to try.

To say that the students were excited to have her visit would be a understatement. We had almost 200 people, and the energy in the room was incredible; everyone was so excited to learn about the work that Battleground Texas has been doing in Houston and the different ways in which students could get involved with the campaign.

If there was one thing about Senator Davis’ speech today that really resonated with me, it would have to be her deep commitment to education and to giving every Texan the opportunity to attend college — an opportunity I have personally been so lucky to have at Rice, but an opportunity that is all too often out of reach for many Texans.

We scheduled 40 new volunteer shifts last night. And even now, only hours after the event, students have been reaching out to me asking how they can get involved. The great thing about Battleground Texas is that from phonebanking to voter registration, community events to digital organizing, there’s a place for everyone on the campaign!

It really is a campaign by the people, for the people — a campaign where student involvement is not only encouraged, but essential.

If you care as deeply about education as Wendy Davis and I do, commit to getting involved today.