Greg Abbott: Siding With the Sociopath

When Greg Abbott collected nearly $300,000 from predatory lenders while making it easier for them to operate, I thought, “Hmm, that’s weird.”

Then he accepted $100,000 from Koch Industries chemical interests and ruled that hazardous chemical locations could be kept secret. Coincidence?

But this week, it got real. We learned that after a “sociopath” doctor killed and maimed patients in botched surgery attempts, the chairman of his hospital gave Abbott $350,000, and then Abbott intervened to defend the hospital against the victims in court.

THAT’S a pattern. And it’s downright disturbing, if you ask me.

We cannot let this guy become our governor. Battleground Texas has the organizing firepower to defeat him — pitch in $3 or more to say enough is enough. 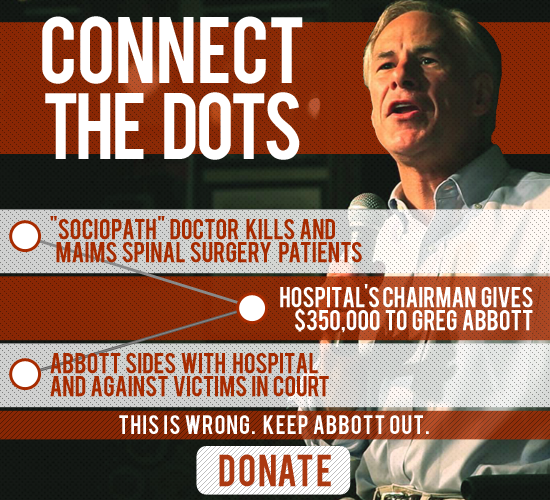 Greg Abbott has a bad habit of siding with the wealthy and powerful (anyone who can write him a big check, basically) at the expense of everyday hardworking Texans.

Frankly, I’m sick of it. I won’t sit here and watch Abbott take his sleazy tactics into the Governor’s Mansion. It’s time to band together and show Abbott that Texans know the difference between right and wrong. And he is WRONG.

Donate $3 or more to channel your anger into action as Battleground Texas fights to keep Abbott out.