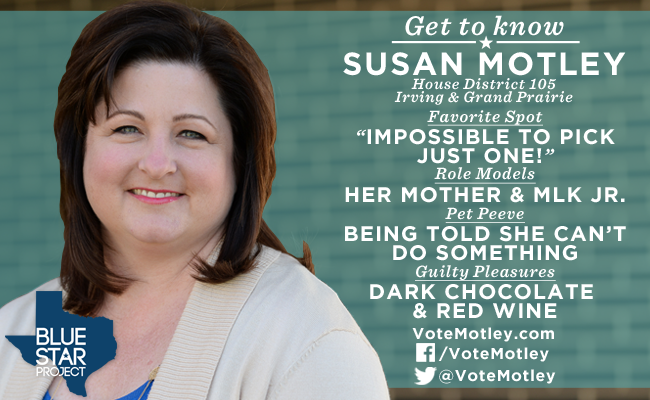 “No matter what difficult issues we need to solve, I will put the people of my community first, not politics. And I will be a workhorse for my constituents.” —Susan Motley

Susan Motley is a longtime Irving resident, having attended Nimitz High School. Her first job was at Mid-Cities Skateland, where she worked her way up from snack bar to skating instructor. She has spent more than 30 years in House District 105 and she has raised four kids there.

After graduating from UT law school, Susan decided that the best way to apply her degree was to help people — first helping workers in employment disputes, and now helping people with disabilities. She is a Supervising Attorney at Disability Rights Texas, a nonprofit law firm where she represents Texans with disabilities, often at no cost to her clients. She has been named a Texas Monthly “Super Lawyer” in 8 of the last 10 years, and has been listed in The Best Lawyers in America five times. She served on the Irving Parks and Recreation Board and on the Irving Advisory Committee on Disabilities, both of which make recommendations to Irving’s City Council.

Susan has also volunteered her abilities as a lawyer to the Dallas Bar Association’s Pro Bono Activities Committee, receiving the association 2013 Outstanding Committee Chair award. She has consistently put the interests and well-being of her fellow Texans first.

Have you ever wanted to be part of a Motley Crew? Now’s your chance — add your name to support Susan Motley in November.