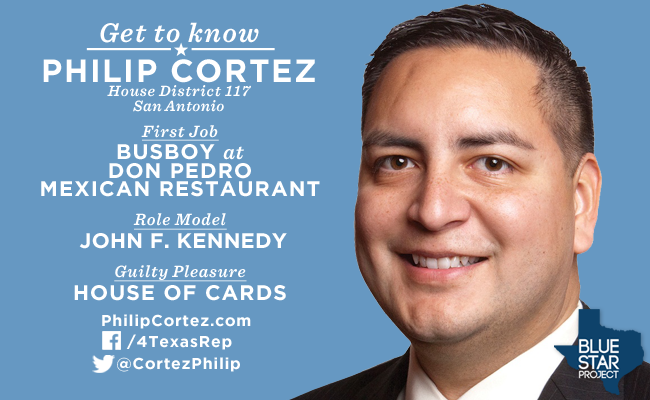 “I was born and raised in the district and I am honored to represent!” –Philip Cortez

When Philip Cortez was a young boy growing up in the Palo Alto neighborhood of San Antonio, his parents instilled in him a sense of duty to his country — and when the time came, Philip answered the call. A year before earning his first college degree, Philip joined the United States Air Force. For seven years, he served as an enlisted airman with the 433rd Airlift Wing at Lackland Air Force Base. He currently serves as a Captain in the Air Force Reserve, ready to serve to protect our freedom.

Since moving to the Reserve, Philip has been elected to San Antonio City Council twice. As a councilmember, he focused his energy on developing the neighborhoods in his district by improving fire and police departments, cleaning up parks, and modernizing libraries. He was also a strong ally to Mayor Julian Castro. Two years ago, he went to the the State House in Austin, where as a representative he has successfully fought to re-fund our schools, support Port San Antonio, and help veterans secure post-combat jobs.

Philip is a big Dallas Cowboys fan and loves playing flag football and basketball in his free time. He also enjoys watching movies and has admitted that the TV series “House of Cards” is a guilty pleasure. He’s not the only one!