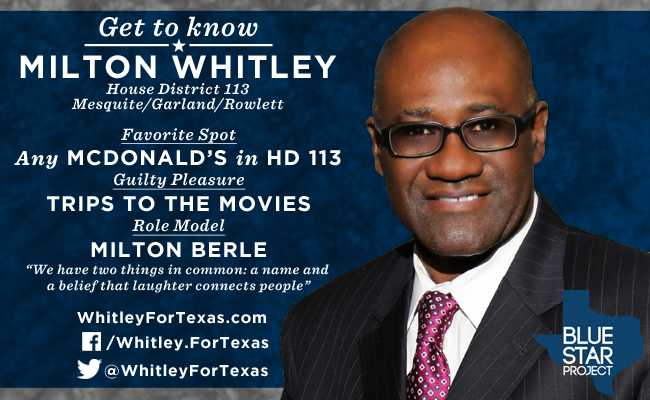 “We need a state legislator that cares about the concerns of voters and working families, not special interests in Austin.” —Milton Whitley

Milton Whitley is no stranger to adversity.

His parents were sharecroppers and he was the eighth of their 11 children. With so many mouths to feed, Milton’s parents had to maintain an incredible work ethic, which they passed on to Milton. In his senior year of high school, his teachers told him that he wasn’t college material and suggested he become a cook. Discouraged, Milton heeded their advice and started work as a busboy. However, his determination soon overcame his lack of confidence, and he quickly rose through the ranks to become a restaurant owner.

Milton and his wife channeled their entrepreneurial spirit into several other successful businesses, including a tax preparation business. He later proved his high school counselors wrong once and for all by earning multiple degrees from Amberton University in Dallas.

After earning his degrees, Milton was drawn to community service. Although his businesses were thriving, he felt that he needed to prevent Texas schoolchildren from receiving the discouraging advice he received as a student. So, he became a teacher in Mesquite ISD. As an educator, Milton strives to have a positive influence on his students by regularly encouraging students to chase their dreams and work hard to reach their goals.

Milton Whitley is focused on bringing solutions, not slogans to the people of his district. His tenacity and ability to overcome challenges will serve him well in this race — join Team Whitley today.