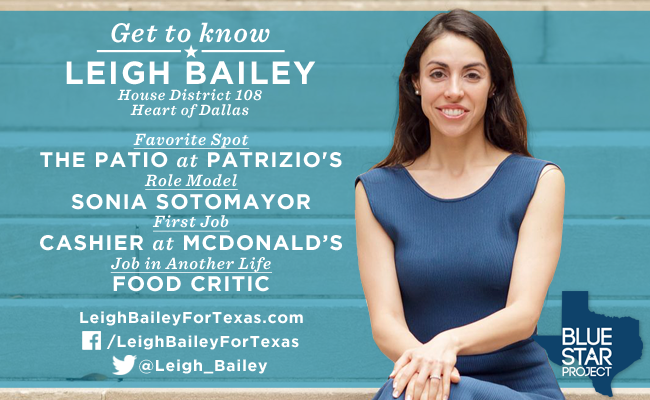 “I’m running because I love where I live.”  –Leigh Bailey

House District 108 sits smack dab in the middle of Dallas County. Starting downtown and extending up through the Park Cities, the district includes the neighborhoods of Deep Ellum, Uptown, Greenville, and parts of Preston Hollow. The district’s House seat is open for the first time since 2002 after the sitting Representative, Dan Branch, failed in his bid for the Republican nomination for Attorney General.

Enter Leigh Bailey. She moved to Plano at the age of five and has since developed a deep love for North Texas. She remembers traveling up to far North Preston Road with her parents to buy fresh produce out of the back of farmers’ pickup trucks. Though she has many fond childhood memories, she has seen considerable growth and change since her arrival, and she’s proud of all the progress the area has made.

Leigh earned her law degree from SMU and has since represented Fortune 500 companies and worked as corporate counsel to a large restaurant company. She understands how critical a fertile business environment is to Texas’ success and will fight in Austin to keep the state’s economy booming.

Leigh Bailey believes that Texas schools should be preparing our youth for the modern labor market. Instead, schools are currently forced to divert too must valuable class time and resources to preparing their students for high-stakes standardized testing. Leigh will fight to reduce the emphasis on test scores and move the focus towards readying students for 21st century jobs. She also supports expanding pre-K and early childhood education programs to ensure that kids are ready to learn when they start school.

Today, Leigh is an attorney, wife, and mother. She has a 2-year-old daughter, Sophia, and is expecting a baby boy in July.

She prides herself on her community activism. She currently serves on the board of the Turtle Creek Recovery Center and the Baylor Health Care System Foundation, and through her membership to the Junior League of Dallas, she has volunteered at nonprofits throughout Dallas.

Leigh’s supporters like to call themselves the Bailey Bunch — if you want a tireless advocate in the heart of Dallas, join them today.