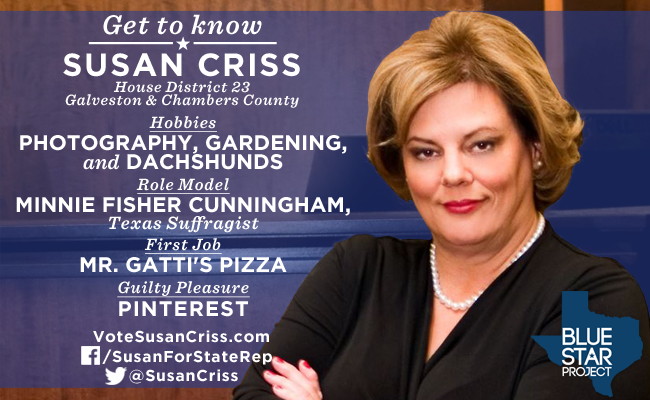 Judge Susan Criss, the daughter of former State Representative Lloyd Criss, is a product of the Texas Gulf Coast. A graduate of La Marque High School, Susan went on to attend the University of Texas and the South Texas College of Law. After nearly a decade in the Galveston County District Attorney’s Office and a short stint in private practice, Susan was elected to preside over the 212th District Court in 1998 — a seat she held for 15 years until she resigned to run for state representative.

During her time on the bench, Susan became known for her embrace of modern technology to demystify the legal system, and worked to encourage the rich diversity of Texas and be a champion for the rights of all Texans under the law. In addition, Susan has consistently fought on behalf of the district’s youth: She spearheaded tougher sanctions against sex offenders and fought for stronger child protections, and she founded the Galveston County Child Advocacy Center and the Galveston County Child Abuse and Neglect Task Force.

Judge Criss’ primary motivation to run for state representative is very simple: She wants to ensure that coastal residents are less vulnerable to economic devastation from natural disasters. Having worked on thousands of cases relating to Hurricane Ike damage and taking in six feet of water in her own home in the process, Susan knows firsthand the fear and uncertainty that storms bring with them.

Galveston and Chambers County deserve a representative that will stand up for them in Austin. With almost 30 years of experience in the legal system, knowledge of how laws work in practice, and a proven record of protecting the citizens of the Gulf Coast, Judge Susan Criss is ready to lead — she’s the right choice for HD 23.

Ready to join Judge Criss? Add your name to show your support.