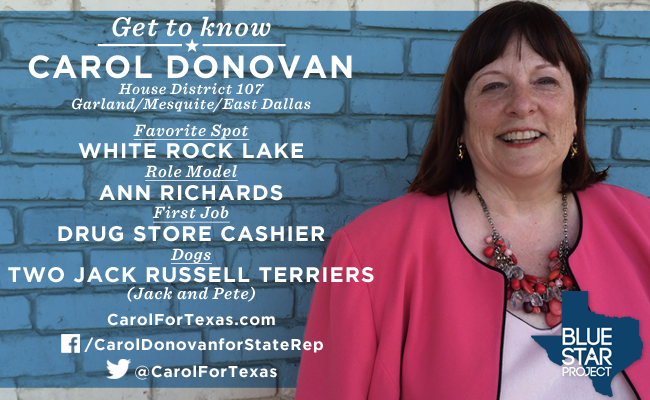 “I am an attorney, wife, mom, and daughter who knows how to find common ground and create solutions.” —Carol Donovan

Carol was born and raised in District 107, and she raised two children in Lakewood with her husband, Dan. She’s a product of public schools: Bryan Adams High School, the University of Texas at Austin, and Texas Tech School of Law. Always a community leader and trailblazer, in 1975 she became the first woman ever elected student body president at UT. And her first job out of college was on the congressional staff of the great Jake Pickle.

Carol loves the people of her district and hopes to fight Republican extremists who have harmed them with reckless policies. She is running for the Texas House because she believes legislators should represent their constituents instead of passing laws that impose their personal views on the people of Texas. She can’t wait to take on the special interests in Austin on behalf of her neighbors and friends back home.

When a nasty hail storm ravaged her district in 2012, Carol’s opponent sided with insurance companies working against residents. Carol, on the other hand, vows to fight sweetheart bills for wealthy campaign donors. As a Representative, she will also protect personal medical decisions, strengthen public education, and defend homeowners.

Trust me — you can count on Carol. She’s building her grassroots support in Mesquite, Garland, and East Dallas every day. Sign up now to say you’re on Team Donovan.